MARK:  “Turn towards me Sir, count to ten and speak in the direction of the machine.” The Traffic Cop looked me directly in the eye, thrusting his digital machine forward into my face.

Moments earlier, we’d been quietly driving along on a beautifully sunny South New Zealand road a few minutes out of Te Anau.  We were third in a group of five cars.  Two vehicles ahead had for some reason turned off left into a lay-by where a make-shift road block had been created.

One hundred metres to the left a police car had its boot open and inside appeared to be a mobile laboratory, one that a mad professor would have been proud of. 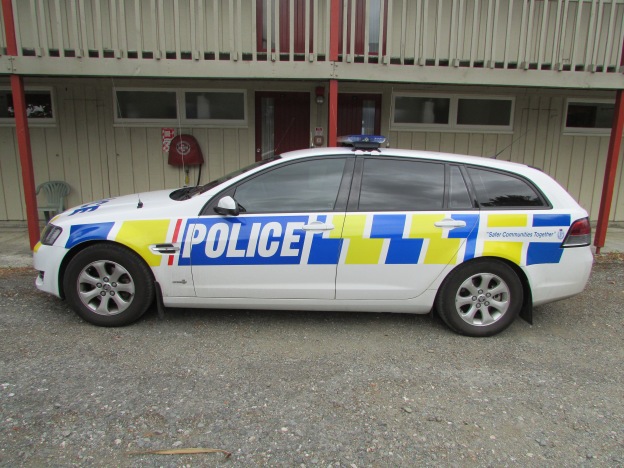 It then suddenly dawned on me. This was a coordinated blitz by the local constabulary targeting Summer drivers, ensuring they were not still drunk the morning after the heavy night before – something particularly important in a country where at this time of the year there are literally hundreds of camper vans on the road. 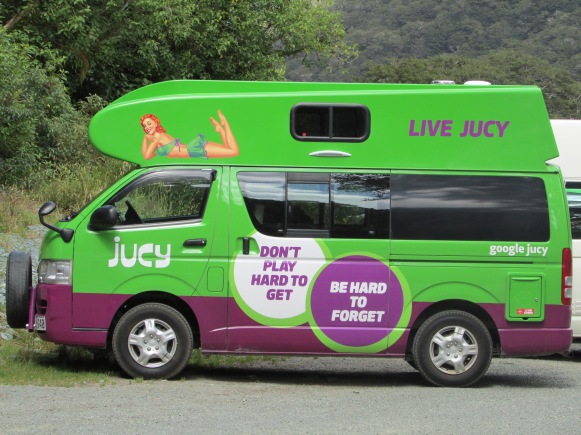 I could see out of the corner of my eye, one Chinese driver with numerous passengers in his “mini-bus” helping police with their inquiries. Happy Chinese New Year, or possibly not for this man…

The male driver of the first of the two cars in-front of me spoke to the middle-aged Policeman and was allowed on his way.  Next the lady in the white Toyota 4WD was waved on her way.  Now it was my turn.

But for once I wasn’t worried in the slightest and the “Bobby in Blue” could sense my lack of concern. The “B” Machine quickly showed I was clean and I was bid a good day and safe journey.

I wasn’t worried for one simple reason and that is I’d only had two glasses of wine in nearly two weeks, as I strive desperately to diet and lose around 2.5 stones in preparation for what will be the biggest physical challenge of my life, climbing the Inca Trail in 51 days time. 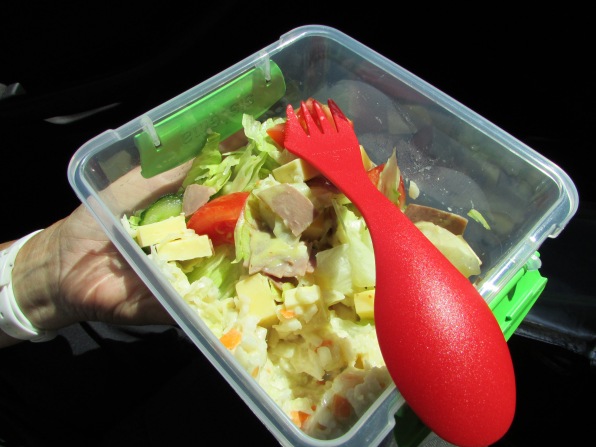 Every day we try and walk between five and ten miles. That in itself is not particularly difficult in what has to be the most beautiful country scenically anywhere in the World.  It’s when you add into the mix, mountains which quite simply means going up and down!  We are getting better and only today in Queenstown managed a small mountain of 850m from a base of 250m (five miles duration) followed by a second called Coronet Peak, when we walked from the bottom of the ski car park to “nearly the top”.  That was more of a challenge, walking up red ski runs from 1800m to near the summit at 2200m.

It is always worth it at the top as the photos below will testify.  Plus, you often meet some really interesting people. And there is nothing better than watching planes land beneath you @ Queenstown International Airport and then viewing scenic helicopter flights fly BELOW you allowing you to wave to the passengers who have paid a fortune for their trip around the mountains… 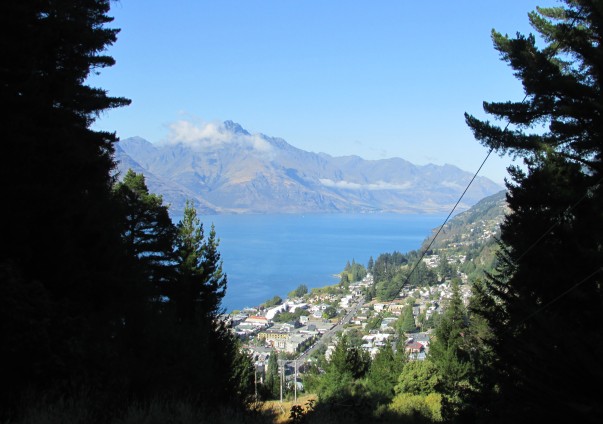 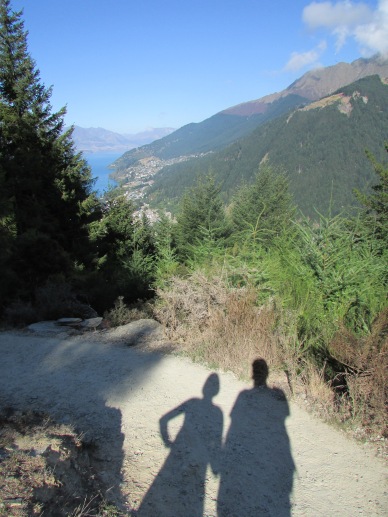 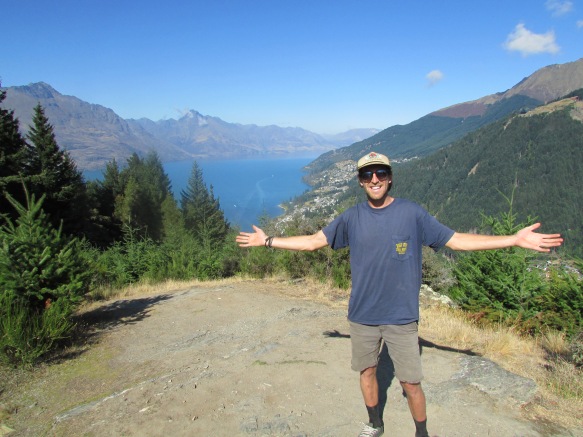 Nice guy from Colardo, US 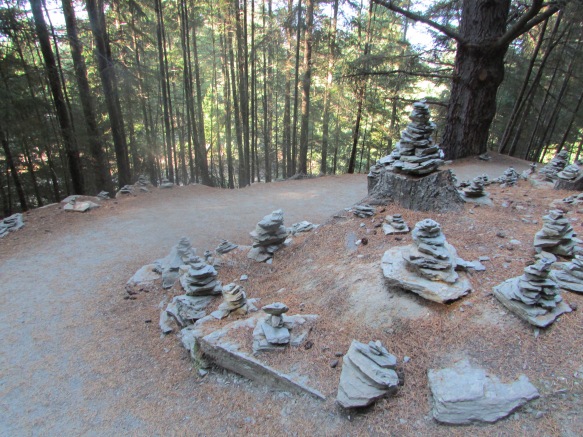 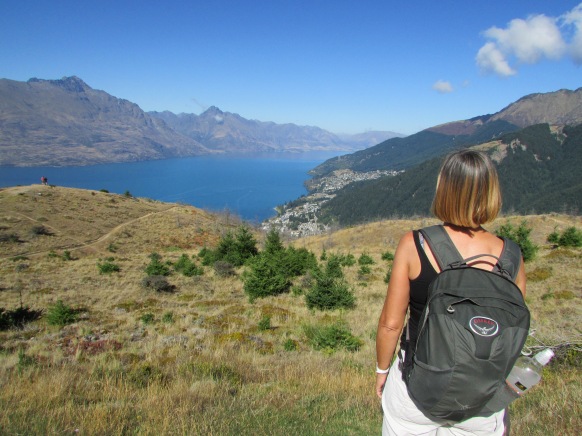 On top of the World… well nearly 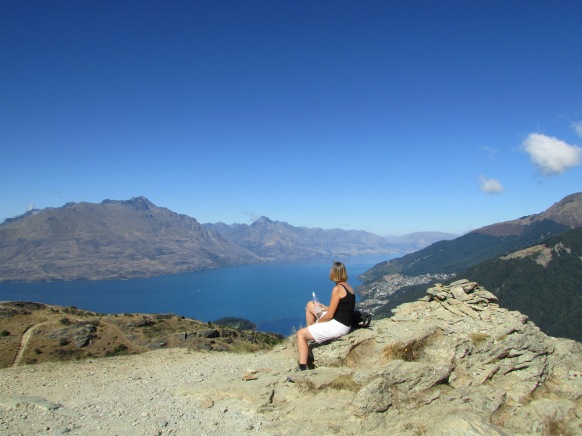 One of our best recent walks was about an hour after meeting NZ’s finest police officers.  We started near the Mirror Lakes… 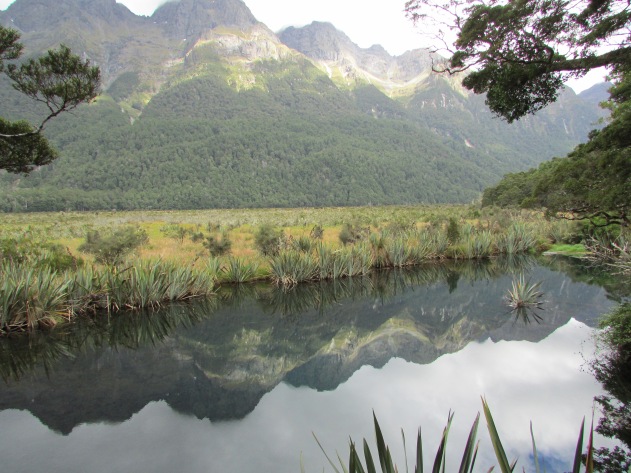 …. and managed to get to one of the high walking huts between Milford Sound and Te Anau at a place called “The Divide”.  Elevation up and down was 1200m (around 4,000ft) and we nailed it (6 miles) in around 100 minutes. 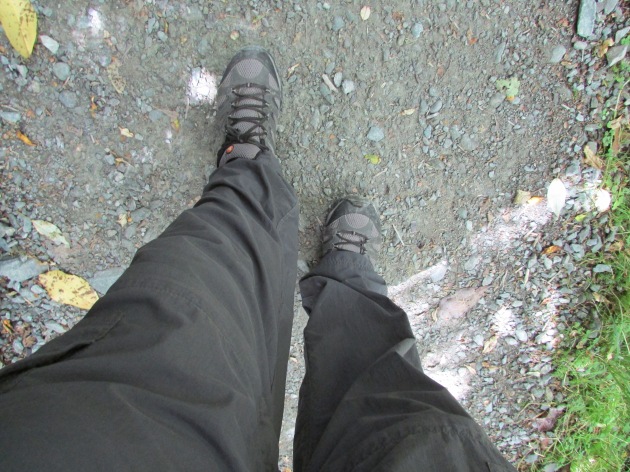 The best bit was over-taking young people 30 years our junior and then to cap it off, a walking group who were professional trekkers.  OK, so they had probably walked 10 miles more, but the satisfaction of “burning them off” was great – not that I am competitive at all. 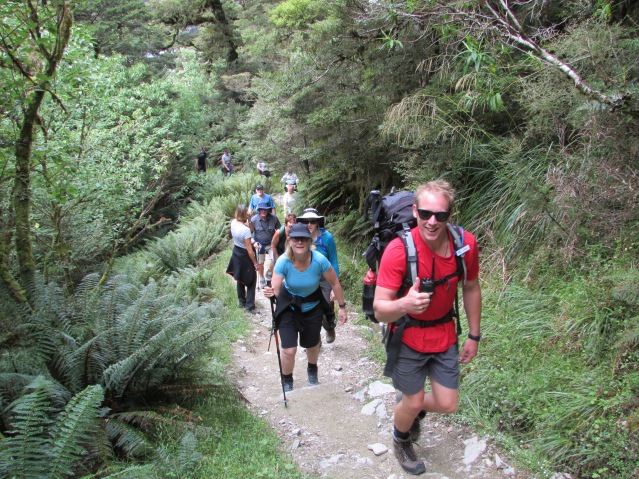 We walked down the hill, turned round and still beat them

A real treat on this particular walk was making our way through the temperate rain forest where there was a superb display of moss, fern and lichens in an area that has around 8 metres – yes eight metres (football tele-printer “eight”) of rain a year. 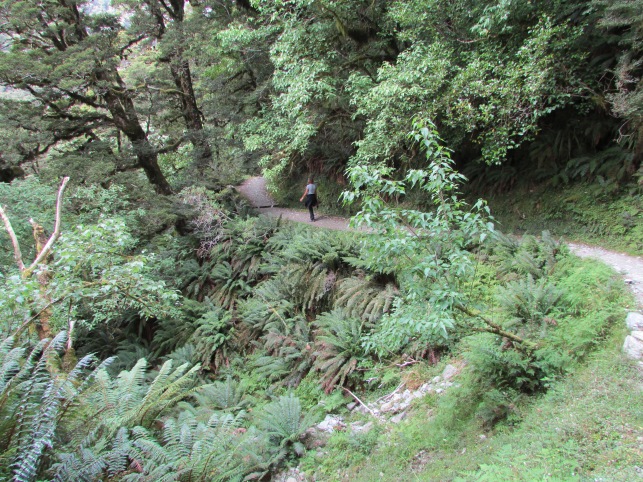 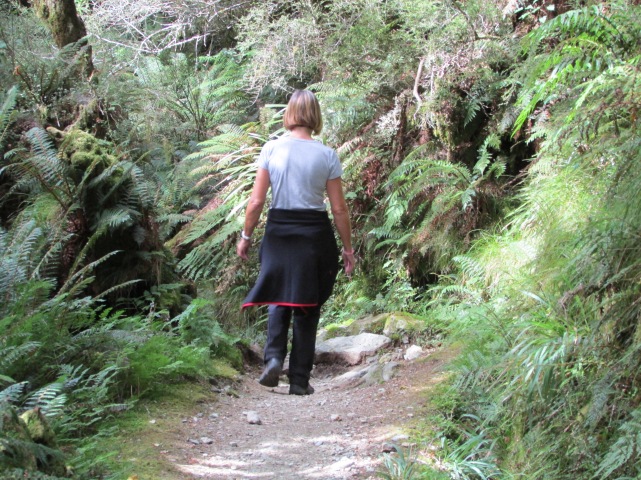 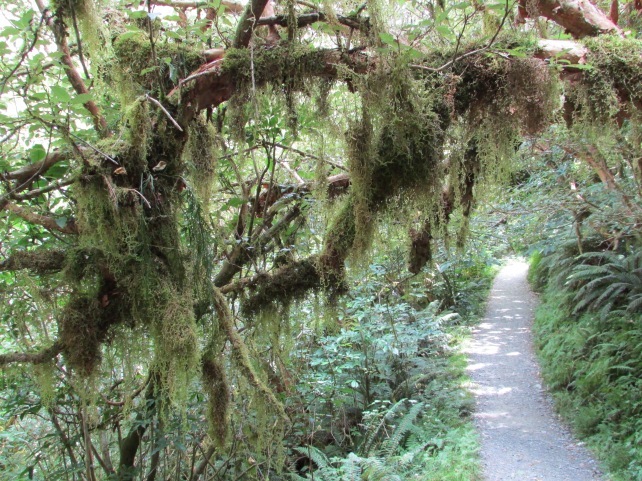 Elated with our achievement, we celebrated by going to two “green toilets” that smelt to high heaven, which is probably where we were when you looked out of the “trap door”.  Thirty minutes later and a quick drive through a fantastic mountain tunnel we reached the World Famous Milford Sound which in my opinion was much better than Doubtful Sound, even with the “drizzle” – local speak for “chucking it down” for us Brits. 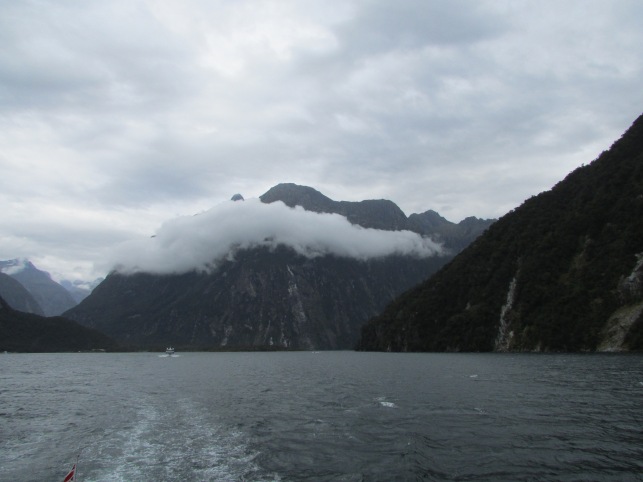 Talking of rain, we have worked out that it is has only rained for any significant period ie all day – for no more than 6 of the last 160 days.  The planning, in terms of working out which country we would be in, season wise, has so far paid off big time, none more so than in Northern Queensland where the day after we left, a Cyclone (Cat 2 hit) and it has been raining there pretty much ever since.

The sun has shone a lot here and one thing you do notice in New Zealand is the really deep, sharp colours of the sky, countryside, lakes and mountains.  Anne commented on this point after my last blog, based on her childhood memories and she is absolutely right.  Maybe this something to do with the ozone hole that is presently sitting over NZ, or the fact that there is no pollution which our Chinese friends just cannot get over. 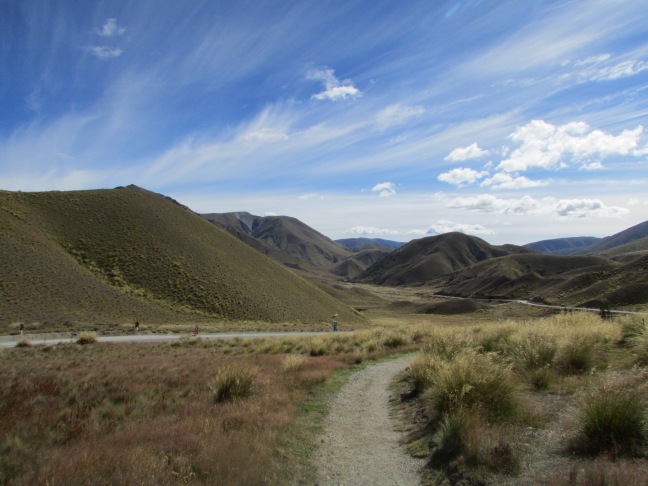 Love the sky in NZ

They have been around in their thousands this week because it’s Chinese New Year… and no offence to Gemma, but we hope they leave for home soon as they cannot drive on the left to save their lives and each day nearly attempt to end ours by their terrible driving skills and their insatiable habit of taking selfies on blind bends when cars are whizzing past at 100 kph.

Anyway, enough of that, back to the colour thing and indeed our training programme.

So we were walking along a river just north of Queenstown on a short two miler, when the World famous SHOTOVER JET BOAT, roared past at a speed of 50 mph in a river no more than 6 inches deep.  Sarah’s red T Shirt matching nicely the red of what is a “Ferrari on water.” 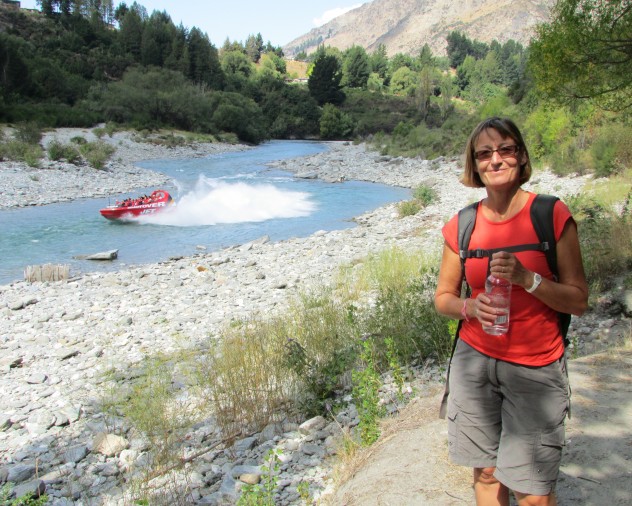 We’d seen the picture of Kate and William having a go and we were not sure about daring to fly through canyons and ravines at such speed.  But then we thought what the hell, we’re not coming back here and so quickly walked back to the booking office and promptly got on the next flying boat 20 minutes later. 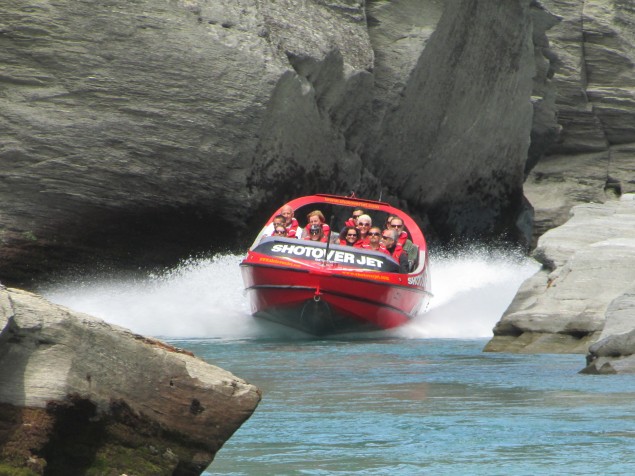 Inches from the gorge cliffs 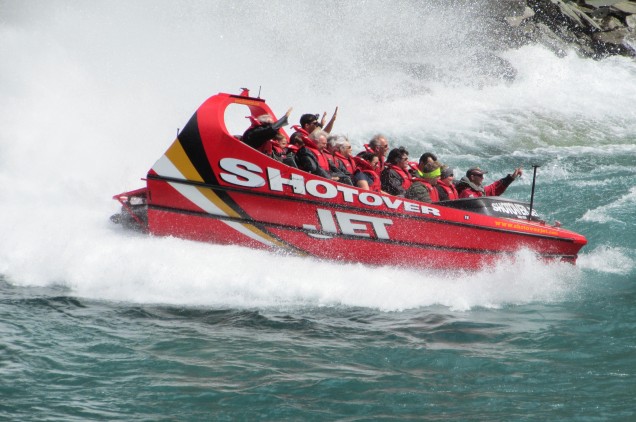 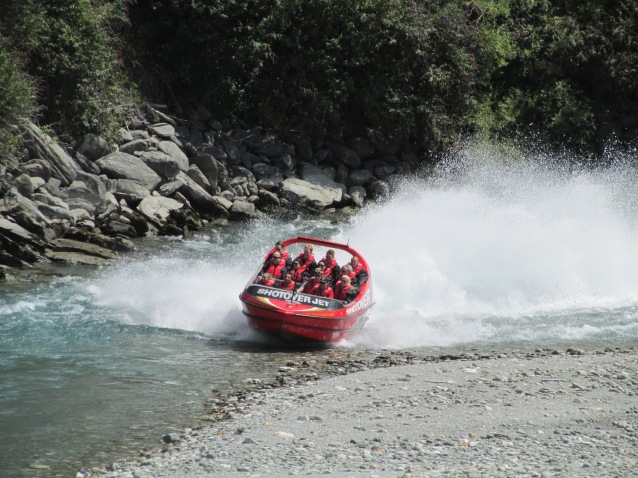 90 degree bend in 8 inches of water 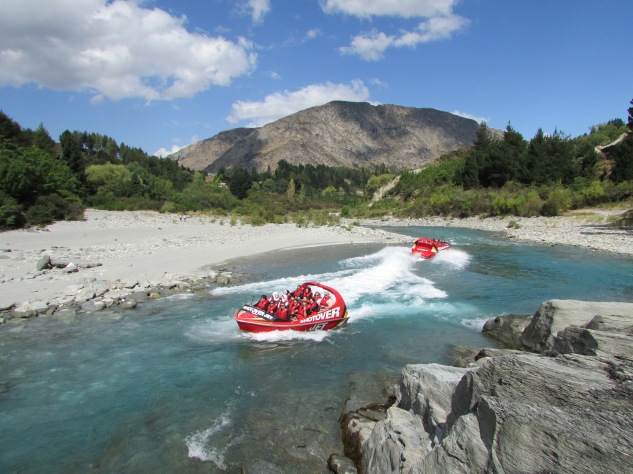 Where we first saw the Jet Boat

OMG what a blast, quite literally! It was a superb experience and you can see why this company has been going for 50 years.  I’ll never forget doing 360 degree spins with rocks on either side of the boat, so close you could virtually touch them.

Back down to Earth now. And as the light begins to fade over the mountains in front of me, we leave you with a few words from local artist Caroline Robinson and a shot of her BASKET OF DREAMS sculpture that we saw today.  The last line says it all…Happy Valentines Day!

The Basket’s spiral of steel follows you

to draw inspiration from the mountains, lake

and from those who are with you 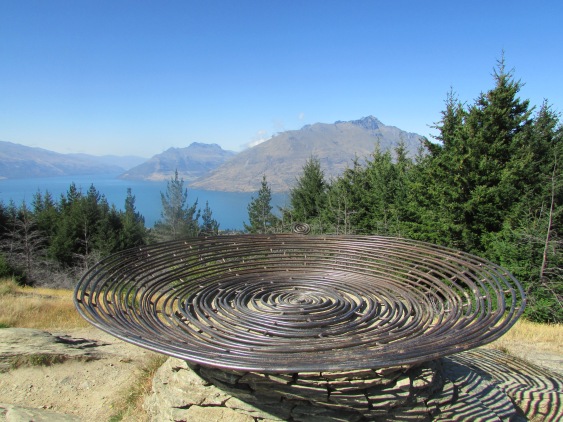 The Basket – Shane, you would have been impressed