MARK: “So where did the inspiration come from, for this hair brained idea of travelling the World?”  It’s a good question and one we’ve been asked a lot recently. The answer is, underneath the stars whilst sleeping out in the middle of the Wadi Rum Desert, where we met Ted the Camel.

Ted isn’t really a camel – he’s a lovely chap, whose married to an even lovelier lady called Lesley. They were our travelling buddies around Jordan a couple of years ago and regaled us with loads of stories of how they had travelled around the World, having decided to simply “take off” from their Cornwall home, a little later in life….

We were impressed! So much so, that we said then and there, “that’s what we’ll do!”

So where does the camel come in? Well, truth be told I sometimes get the hump – hard to believe, I know! But there were a couple of people in our travel group, who let’s just say were a bit of a pain. Ted kept winding me up about this. So enjoying a couple of G and T’s on the flight back from Amman, my new friend with a glint in his eye presented me with a small present – a fridge magnet…

I promptly named him ‘Ted’ and @ 35,000ft, promised that if we ever did travel, our little friend would come too – a promise we will fulfil over the next nine months – watch out for the photos of Ted on Tour!   Meanwhile, if you are ever in Cornwall – go and say hi to Ted. He’s the skipper of the boat that takes people from the Cornish mainland across to St Michael’s Mount when the tide’s in. A top bloke – a real inspiration! 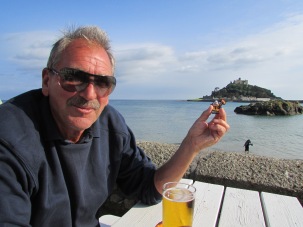 So you know what Ted looks like – here he is on his boat with Sarah, with Ted the Camel and with his lovely wife Lesley

2 thoughts on “Blame Ted the Camel…”