BUDDA (TEST) OF HOTELS – A “TAIL” OF MONKS AND MONKEYS

ADMIN – We are back – hope he brings me back an iPhone after all this?………….Click on Photos for larger image

But for those of you who want to see a “Cute” Panda, take a look at this shot. This baby is about two months old and is fed like a human baby – the handler even “burps” the baby by patting his back. Ahhh. Anyway, the Pandas visit seems a long time ago now. So onward we must write. 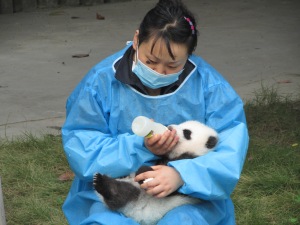 MARK: “So tonight we stay in Monastery”. I was only half listening to our Guide Carina, as we sped along in a little 16 seater bus at 110kph down the main highway from Chengdhu to the Leshan, somewhere in the middle of China.

That’s a nice name for a hotel I thought, with visions of Fountains Abbey flashing through my mind coupled with the sound of Cistercion Monks and Gregorian chanting.

“You’ll be sleeping with the Buddha”. Suddenly I was all ears, this wasn’t the name of our next hotel, but literally a Buddhist Monastery, complete with Monks on their pilgrimage, from the Tibetan Border. The Baoguo Monsatery it transpired, was going to be our home for the next two nights, at the foot of sacred Mount Emei.

Three hours later the bus screeched to a halt in front of a large Pagoda, two Monks “guarding” the entrance. We clambered off not know what we were letting ourselves in for as wafts of powerful incense and “joss sticks” drifted towards us in the gloomy twilight air. As we walked through the giant wooden door, we entered a courtyard, trees all around, a giant “urn” in the centre and the site of a golden Buddha with worshippers kneeling in front of “their God”. I felt uncomfortable, walking past with my front and back packs securely strapped, totally at odds with this religious shrine.

The first of three courtyards

No time to think though, as our single file snake of weary travellers headed round a corner into a second courtyard, a number of worshipping tourists coming the opposite way down the steps heading for the exit. The Monastery was about to close to members of the general public. Up some more steps, past an inverted swasticka created out of what appeared to be Chinese Coca-Cola Cans and then wow! Seven giant Buddhas, each about 30ft high looking down on us as we reached the inner sanctum and our “dormitory” bedrooms. 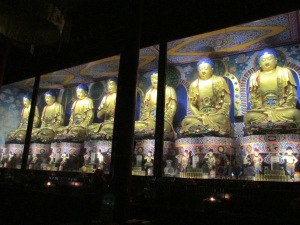 Bizarre inner courtyard and just outside our bedroom 1616

G Travel are smart people. They had identified that subject to availability (if not many pilgrims were in town) the Monastery would offer FREE OF CHARGE, beds for travellers like us, to sample life as a Buddhist for 48 hours. Barry Sutlieff, this place had your name written all over it – Buddha Heaven.

Carina initially split the group in to male and female (4 men and 12 females), for            sleeping arrangements, but then Canadian Court, whispered in a loud hiss “Mark get yourself over here…..” You don’t mess with 6ft 6” 240lb blokes, so I followed as did Sarah. Court and his wife Linda had managed to find a five bed dormitory room and he thought that it would be a good idea if we stayed in the “west Wing”. There seemed to be no objections so we plonked our bags and looked around the most austere and basic “bedroom” you have ever seen. Five rock hard single beds. A sideboard thing, four bedside tables and a flat screen TV that did not work. The room had not been decorated for years. The filthy curtains hid five broken pains of windows. A cockroach lived in the corner, along with a few Mossys. Two Chinese prints of stallions in full flight were hung between a large NO SMOKING sign. We’d arrived, but the adventure was just beginning.

Not quite De Vere Venues standards

“Patrick” our local Guide, showed us the bowl where we could wash in an outside courtyard – if you looked up, the roof was in fact the sky, with Jupiter twinkling in the inky blue last throws of daylight.

“Any toilets?” Sarah asked. A fair question. “Arrrrre yessssss Saaaarrrrraaaaahhh, round corner.” Patrick was right, 50 yards round the corner were some communal “squat” toilets for men and women – although Sarah only discovered they were designated single sex toilets a day later when she wondered why the Monks were looking at her strangely. She’d be in the wrong side! No wonder these Monks who normally show little facial emotion were smiling every time they saw her around the Monastery!

Monk down time…. Chilling outside of our bedroom window

So the toilets were relatively near to our room, but the communal showers were some 200 metres away, past the seven Buddhas and two other shrines, at the end of a long corridor. They were a bit like showers you had at school, privacy not great which was a problem for some of our party. The best bit though was when Court and I decided to “take a shower” which could only take place AT NIGHT between 6.00-9.00pm when there was hot water. Court strips to his shorts, takes off his shirt and puts a towel around his neck. We head off, me with my towel and a bar of soap in my hand. “Better not drop that in the shower Buddy” Court smiles…. I got his meaning a few moments later, just as there were shrieks of laughter from some “lady Monks/Worshippers/Followers” at the entrance to the shower block. Clearly they had never seen a giant semi naked white man coming towards them wearing golf shorts and little else. I tried to explain that he was a man mountain God from the wilds of Canada but there was something lost in the sign language translation. The showers were however very good and were similar to the ones that Lex Hughes my old De Vere Venues colleague had described to me at his former school, Ampleforth College, that also a home to Monks!

Showered up and smelling sweet, we had dinner in the local town, before all agreeing to meet in a open air corridor, close to seven Buddhas, outside of the Dorms where the rest of our group were staying. Numerous bottles of Great Wall Red Wine were consumed, before lights out at 10.00pm. Would we survive the night? 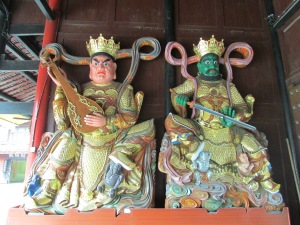 These two really frightened me at 0200 as I headed to the loo.

Smelling sweet after the shower

Next morning at 5.30 am, through the semi-haze of sleep I heard the chiming every ten seconds of a bell, struck by a “Mini Monk”. I had to investigate. Quickly throwing on some trousers I headed out of our room by myself, past the seven Buddhas and down some slippery stone steps towards the sound of chanting. I peered through a wooden lattice window just like a naughty schoolboy trying not to get caught. Behind the screen were the Monks – all men on one side and a few ladies on the right, positioned away from the main event. I watched for a while, but decided that I was intruding on their private worship and so went in search of hot water to make some much needed coffee. The urn at the end of the Courtyard was hissing steam. Boy did that sachet of Nescafe taste good.

The main reason for staying in a Chinese Monastery in addition to the unique experience was so that we could be close to the beautiful Mount Emei a large mountain range popular with local Chinese visitors.

The weather was not good as we set off at 9.00am for our ten mile hike. The rain was heavy as grey cloud quickly enveloped the higher peaks. We were disappointed that the rain had come but quickly had to remind ourselves that this was only the fourth day of rain that we had in 52 days….

The rain did not dampen our spirits although four of the group decided to stay behind which was fair enough. They hadn’t the kit and you needed it. Clad in our North Face Gortex jackets we were ready for anything and ready to climb to the second highest peak from an elevation of about 1000m to just under 2000m via two valleys. We were in search of Tibetan Stub Monkeys (Stub as they don’t have tails), who had a reputation! And my God we soon found out what for pretty soon!

After a couple of sodden hours, Sarah and I headed off with three other members of our party to explore some of the side valley, which was described by one as very similar to the mountainous area of New Zealand’s South Island. We traversed swing rope bridges over deep ravines, the rain and sweet corn making the wooden surface treacherous to say the least. Yes, I did say sweet corn, although thought nothing of it at the time, as we headed about 100ft up the other side of the valley to wait for the remaining members of the party.

Suddenly a monkey appeared, then four or five others of various ages and sizes. Small ones first, then slightly larger ones with big whiskered “old boys” bringing up the rear. One climbed up Sarah’s leg and was promptly beaten off by a bamboo stick. We watched the monkey troup head off down towards the bridge where by now the rest of the group had arrived.

I then clocked it. This was an ambush scenario involving the Monkeys “aided” by local Chinese, all armed with sticks. Monkey business!

The Monkeys had followed a couple of Chinese ladies onto the bridge, following it would appear the trail of food – nuts, corn etc. As our party came across the swinging bridge, the monkeys pounced. Carina our guide had four on her head and body, Demi one of our young fellow travellers was also jumped. The Chinese ladies started beating them off, asking for money at the same time…. What a surprise. But this was no laughing matter. The Monkeys were vicious, scratching and pawing. I ran like hell with my stick down the hill. These guys were under serious attack. Thirty seconds later I arrived as the last monkey had legged it. Carina and Demi were in a state of shock. 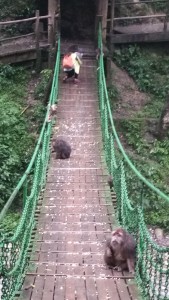 Under attack these monkeys were viscious!!

The 12 members of the party quickly regrouped and we aborted the hike and headed to a Medical Centre, which just happened to be a few hundred metres away. Both, girls were checked out and because of their injuries, were given Rabies jabs there and then. Suddenly we were pleased to have spent £180 each on Rabies jabs – although we had never expected monkeys to be the potential cause of what can be a life threatening condition. I later asked Demi what the cost had been and she said £10…. Cheap at the price, but still glad that we had invested in this “optional” jab before we had left the UK. She on the other hand has to find a vaccine on Day 7 (when we are in Hong Kong) and Day 21 (somewhere in Vietnam where she will be then).

So we hope you enjoyed the tail/tale of two Monk(eys). One a quite gentle breed, the other less so. This was an unforgettable experience and one we will remember for some time.